OpenAI’s new chatbot can hallucinate a Linux shell—or calling a BBS by Benj Edwards
Tuesday December 6th, 2022 at 2:54 AM

Over the weekend, experimenters discovered that OpenAI's new chatbot, ChatGPT, can hallucinate simulations of Linux shells and imagine dialing into a bulletin board system (BBS). The chatbot, based on a deep learning AI model, uses its stored knowledge to simulate Linux with surprising results, including executing Python code and browsing virtual websites.

Last week, OpenAI made ChatGPT freely available during a testing phase, which has led to people probing its capabilities and weaknesses in novel ways.

On Saturday, a DeepMind research scientist named Jonas Degrave worked out how to instruct ChatGPT to act like a Linux shell by entering this prompt:

spongbeaux
reply
Chatgpt is sensational. Feels almost like intelligence (until it doesn't)

‘How the Wordle Editor Is Ruining Wordle’ by John Gruber
Saturday December 3rd, 2022 at 7:23 PM

Look: I’m sure that Tracy Bennett, the Wordle editor, is a lovely person and a skilled crossword editor. But when I do a Wordle and discover I’ve walked into someone else’s pun, I feel foolish. The butt of a middlebrow dad joke. I want to tell Joe Kahn that the Times’ ever-expanding dominion should leave some room for serendipity and strangeness in the world.

No more puns, I beg of you, Wordle queen. I now understand that you started your reign on November 7 with BEGIN. Please: It’s time to CEASE.

I saw the Times’s announcement that they’d hired a Wordle editor, but I didn’t realize she was playing puns until the Thankgiving solution was FEAST. I had that one down to *EAST and guessed BEAST first, thinking it wouldn’t be FEAST on Thanksgiving. And when I realized it was, I was furious. Yes, that’s right, I got furious at a free word game.

Count me in with O’Leary — however central puns are to good crossword puzzles, they have no place in Wordle.

spongbeaux
reply
down with the wordle editor! (position)

Samsung’s Android app-signing key has leaked, is being used to sign malware by Ron Amadeo
Saturday December 3rd, 2022 at 3:08 AM

A developer's cryptographic signing key is one of the major linchpins of Android security. Any time Android updates an app, the signing key of the old app on your phone needs to match the key of the update you're installing. The matching keys ensure the update actually comes from the company that originally made your app and isn't some malicious hijacking plot. If a developer's signing key got leaked, anyone could distribute malicious app updates and Android would happily install them, thinking they are legit.

On Android, the app-updating process isn't just for apps downloaded from an app store, you can also update bundled-in system apps made by Google, your device manufacturer, and any other bundled apps. While downloaded apps have a strict set of permissions and controls, bundled-in Android system apps have access to much more powerful and invasive permissions and aren't subject to the usual Play Store limitations (this is why Facebook always pays to be a bundled app). If a third-party developer ever lost their signing key, it would be bad. If an Android OEM ever lost their system app signing key, it would be really, really bad.

Guess what has happened! Łukasz Siewierski, a member of Google's Android Security Team, has a post on the Android Partner Vulnerability Initiative (AVPI) issue tracker detailing leaked platform certificate keys that are actively being used to sign malware. The post is just a list of the keys, but running each one through APKMirror or Google's VirusTotal site will put names to some of the compromised keys: Samsung, LG, and Mediatek are the heavy hitters on the list of leaked keys, along with some smaller OEMs like Revoview and Szroco, which makes Walmart's Onn tablets.

Valve will give away a free Steam Deck every minute during The Game Awards by Sean Hollister
Thursday December 1st, 2022 at 4:54 AM

The Verge - All Posts

One more reason to watch The Game Awards this year: Valve has announced it’ll give away a Steam Deck handheld gaming PC every single minute on December 8th. With a likely runtime of 2.5 hours — last year’s ran three — the company’s probably going to be giving away at least 150 Steam Decks.

It’s the highest-end model with 512GB of solid state storage and the anti-glare screen, and all you have to do to win is sign into Steam here on December 8th and watch the show at Steam.TV or at Steam’s 2022 The Game Awards page.

Well, you do also have to be living in the US, UK, Canada, or the EU, specifically these countries:

The system will also be out in Japan, South Korea, Hong Kong, and Taiwan in late December, but not in time for the giveaway.

The Steam Deck keeps getting better all the time, and I haven’t hesitated to recommend it for months, despite some lingering annoyances (like how you have to keep the system on, with a lit-up screen, to download games). I love mine, and if you win one, please let me know!

spongbeaux
I mean, unless they all catch fire or something in the Australian climate Here's an exciting 'AI can do that now' moment: Meta's latest AI, Cicero, can beat human players at classic negotiation and betrayal game Diplomacy. While playing online at webDiplomacy.net, it's achieved "more than double the average score of human players", ranking "in the top 10 percent of participants who played more than one game". It can figure out who needs persuading to do what, then engage with those players using impressive and effective natural language.

spongbeaux
reply
Sure, teach an AI to be duplicitous and conniving. What could possibly go wrong?

spongbeaux
Oh it's okay, it's Meta doing it

Ferrari’s defence of strategy that left Leclerc 10th on the grid by Josh Suttill
Friday November 11th, 2022 at 9:36 PM

For far from the first time in the 2022 Formula 1 season, Ferrari was left trying to explain the logic behind a tactical decision that disadvantaged its erstwhile title hopeful Charles Leclerc after Brazilian Grand Prix qualifying [...]

The post Ferrari’s defence of strategy that left Leclerc 10th on the grid appeared first on The Race. 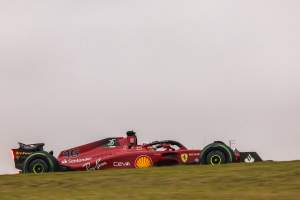 spongbeaux
reply
Ferrari strategy can't continue like this. Every weekend there's something wrong. It's never a genius outcome, always explaining away failure.